Dada Areogun | Fashor and Eagar
Information on the Yoruba African art carver Dada Areogun, more about his carving and his life. Dada Areogun is considered to be one of the mastercarveri of African art.
Dada Areogun, African Art Areogun
52
portfolio_page-template-default,single,single-portfolio_page,postid-52,theme-bridge/bridge,qode-quick-links-1.0,woocommerce-no-js,ajax_fade,page_not_loaded,,paspartu_enabled,columns-3,qode-product-single-tabs-on-bottom,qode-theme-ver-16.9,qode-theme-bridge,wpb-js-composer js-comp-ver-5.5.5,vc_responsive 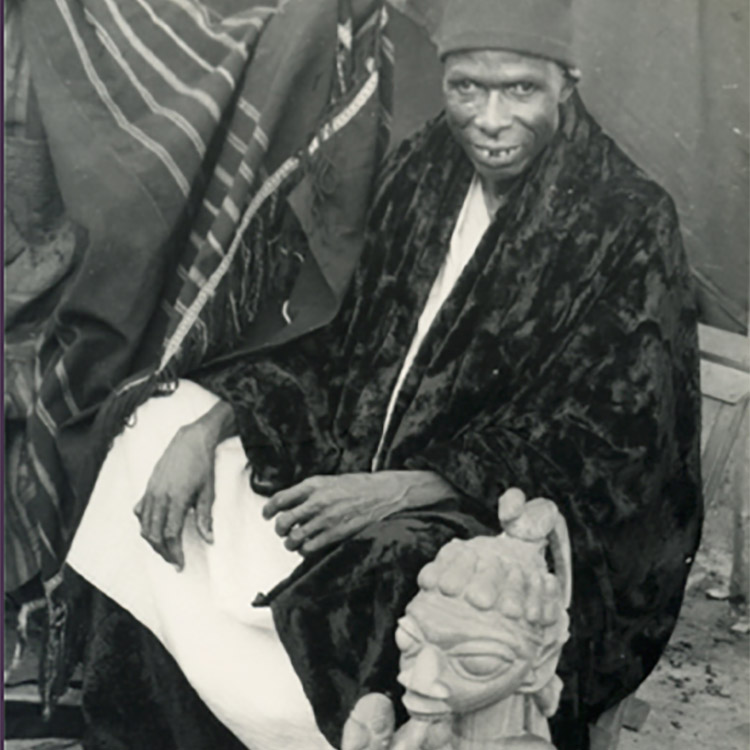 Dada Areogun, arguably second only to Olowe in prolificacy in the annals of traditional Yoruba carving, was born about 1880 in the village of Osi. Now known as Osi- Ilorin, present day Ekiti State,  Osi is just north of the Ekiti – Ilorin boundary. Osi is one of the twelve villages of the Ợpin Yoruba clan.

The artist’s real name was Dada, a traditional name Yoruba peoples reserve for a new born with abundant curly or knotted hair (dreadlocks).  Àrẹògún also known as Arówógὺn, is a shortened form of Àrẹògún-yànnà, his praise name (oríkì), given because of Dada’s talent, skill  and profuse productivity. Àrẹògún-yànnà means ‘one who makes money with the tools of Ogun, and spends it liberally’. Ogun is the Yoruba deity of iron, and thus the patron god of all professions that employ the use of metal tools, including blacksmiths, warriors, hunters, carvers, etc.

Areogun grew up under the influence of the greatest Yoruba carvers of his period; Roti of Isare, Bamgbose of Osi, Fisan of Isare, and Alari of Ikerin, to name a few. Areogun  spent 16 years perfecting his craft as an apprentice under the auspices of Bamgbose of Osi, another master carver. He then went to work with Fisan of Isare, another master carver, before returning to Osi -Ilorin, to open his own atelier.

Areogun did not content himself with a few primitive tools, as might be thought of carvers of that generation. He commissioned a variety of axes, adzes, chisels and scrapers of different sizes. For example, when carving a complex superstructure, he might have a blacksmith modify a tool, so he could reach otherwise inaccessible areas of the structure. He used rough leaves (erinpin) as sand paper to finish his carvings. Areogun also painted a lot of finished works, before handing them over to the owner.

Even more than the corpus of works  he left behind, Areogun’s greatest legacy to the world was perhaps his son, Bamdele, who thanks to Father Kevin Carroll achieved even greater fame than his father, Dada, as a master carver.